Three Reasons Explain That Most Of The People Like Black Umbrella 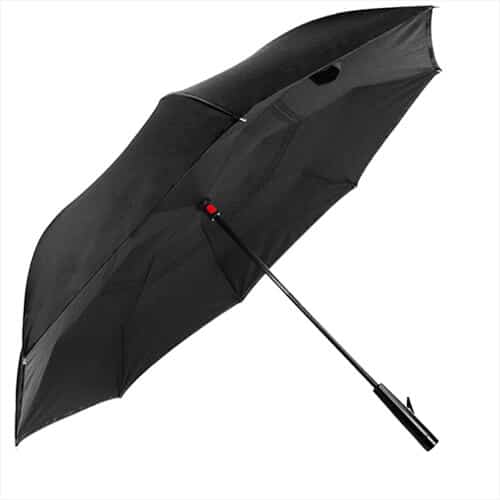 When we go out on a rainy day. We all need an umbrella, but have you found that 60-70% of the people’s Umbrellas fabric is black or dark-colored umbrellas? Have you thought about why most of the people like a black umbrella?

Basically, the umbrella was initially meant for rainy seasons. It was found that umbrellas made of black cloth dried faster than those made of cloth of other colors. So it became a standard practice to use black cloth in the making of umbrellas. The black fabric dries faster because black or dark surfaces absorb more heat from the surroundings than lighter surfaces and as a result, the evaporation process is faster. they used black color fabric so that it would dry faster.

2. Black is of great significance to humans

The man’s formal color is black and white. Black is a symbol of solemnity, stability, mystery, majesty. and the black color is also heavier. while the white color is light and floating, the sense of frivolity plus the formal suit is absolute, Yes, black, grey, blue and other dark tones, In the movie ‘James Bond’ Bond has to wear a black dress to go to the Royal Casino. Men wearing black on formal occasions are already the world’s most common language.

The wedding is to wear black, the formal dinner is black, and the meetings of major customers are to wear black. Whether you board the Great Hall of the People or go to the Nasdaq to ring the clock, you have to wear black. The Western rules for dressing informal occasions are also specifically named “Black Tie.

As a formal wear standard, Black Tie was originally an English translation of the French “private noise”. From the point of view that the British and the French have to put “black” into the official name of the standard. “black = formal” is the consensus of Europeans at that time. The standard for women is often wearing evening gowns, which are themselves a dress that emphasizes the beauty of the shoulders, chest, and arms.

Compared to Black Tie, White Tie is the most formal wear standard. Although the name has a white, it requires men to have a full black tuxedo jacket.

Later, along with war and commercial globalization, this concept of Western-style wear has spread throughout the world. Just as English becomes a lingua franca, black clothes have become the lingua franca of clothing.

Black can be a formal symbol, precisely because it is the most classic existence that transcends time. if you hold a white umbrella at this time, it will be very dazzling.

A black body absorbs all radiation (e.g. heat, light, ultraviolet). It radiates radiation in a typical spectrum called the black-body spectrum. The distribution of this spectrum (especially the position of its maximum) is only dependant on the black body’s temperature. Thus one can measure its temperature by just observing the black body’s color (it will be far in the infra-red for the umbrella, but is red or orange for lava for example).

So the umbrella absorbs all the radiation from the sun.  getting heated up in this process and emits the whole black body spectrum, which is mainly heat (the maximum being in the infra-red). So you could think that a black umbrella might be good for UV protection.

Everyone knows that black clothes will be very hot in the body. It is because the black heat absorption ability is strong. On the contrary, if a black umbrella is supported on the top of the head, the heat is absorbed by the umbrella, and people do not hide in the ground. I feel so hot. Therefore, the black umbrella insulation effect is very good.

send us your inquiry

Let's have a chat

We Will Answer Your Email Shortly!